Irish companies and public bodies interested in recognition for their contribution to the environment have less than two weeks to apply for a Green Award. The deadline for entering this year's Green Awards has been extended to 18 September. Construct Ireland will sponsor the Green Building category for the first time this year. 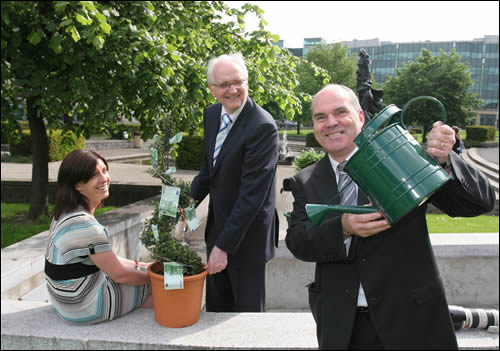 
Irish companies and public bodies interested in recognition for their contribution to the environment have less than two weeks to apply for a Green Award. The deadline for entering this year's Green Awards has been extended to 18 September.

The Green Awards aim to recognise businesses, local authorities, communities and individuals for outstanding achievements in tackling climate change. Construct Ireland will sponsor the Green Building category for the first time this year.


Launching this year's Green Awards, environment minister John Gormley said that half of the jobs created in past nine months have been green. These included 3,500 positions created by the ESB's expansion into renewable energy and an estimated 6,500 jobs resulting from the government's Home Energy Saving scheme. "These are just two areas of jobs growth and there is now record investment in renewable technologies," the minister said.

Noting that this year's ceremony will feature awards for Green Entrepreneur and Green SME for the first time, Minister Gormley said that green entrepreneurship is key to Irish economic revival and sustainability. “In the present economic environment we need entrepreneurs and their innovation and drive more than ever, but in particular, we need them in green industry," he said.

"These green awards recognise and champion the best Ireland has to offer in green industry and technology and I encourage entrepreneurs to look to the renewable and environmental sector for business opportunities, not just because it makes sense for society, but because there is money in it too.”

Michael Sanfey, head of sales and marketing with award sponsors Greenstar, said: "Greenstar is delighted to support the Green Business Awards for a second year running. These awards acknowledge those who have set a very high environmental standard. It’s the leadership demonstrated by these individuals and companies that encourages others to press on with environmental practices and initiatives, all of which ultimately improves company performance and makes a positive contribution to the island’s environment."

Irish Independent business editor Maeve Dineen commented: "The past year has seen a significant growth in the area of green business. In order to recognise this trend two new categories have been introduced, the Green Entrepreneur Award and the Green SME Award. It’s clear that green business can make money and has a very bright future in Ireland.”

Green Awards co-ordinator Eugene Bortolozzo said he received more than 300 nominations for the inaugural awards last year. "Entries included some of the country’s most prominent business people, not-for-profit community groups, schools and green business start-ups," he said. "I would encourage those who have participated in a green project or championed a green initiative this year to submit an entry. It’s a real honour to be recognised as one of Ireland’s green champions.”

For more information on applying for the Green Awards visit http://greenawards.ie/