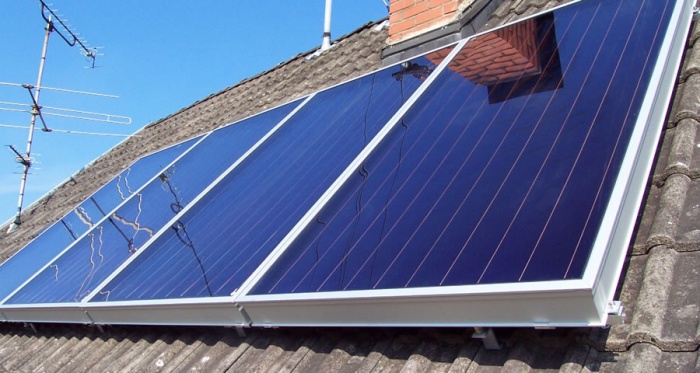 Using solar thermal systems to meet the Part L renewable energy requirement in apartment blocks can be problematic. Long pipe runs in apartment blocks drastically reduce the efficiency and increase the cost of installation. Unoccupied dwellings have overheating problems, and the entire system requires regular maintenance. Photovoltaic systems suffer none of these disadvantages, and are simple and quick to install.

access_time 01:00AM 24 July 2012
Most flat plates and some vacuum tube systems show efficiencies of around 80%, but when you look at the EN certificates for most popular Chinese vacuum flask systems, they are often in the mid 60s or less. Many people assume that this reflects poor quality Chinese manufacture, but in fact it is a quirk in how we measure “zero loss efficiency” which is at noon, and ignores the effect of the sun facing tubes at different angles at different times of the day. This factor is included in test results, described as transversal incidence angle modifier, or IAM.

The efficiency of a panel is usually given for noon when the sun is directly facing the panel. With a flat plate panel, efficiency falls off either side of noon, but with vacuum flasks, the efficiency actually increases. There are two reasons for this.

Firstly, the curved surface of a tube passively tracks the sun. Secondly, whereas at noon, the sun shines between tubes, as the sun moves towards 40 degrees off due south, there is increased reflection from tube to tube, dramatically increasing absorption.

The effect of this change in incidence angle modifier is measured as part of the test procedure for EN12975 certification. To show efficiency at any particular time of the day, the zero loss efficiency should be multiplied by the IAM.

The following chart shows a comparison between the IAM of a typical flat plate system and an Ecologics 58mm flask system at different angles as the sun moves from Noon to evening. A mirror image of this graph happens between sunrise and noon.

At its most extreme point, with the sun at an angle of 60 degrees, the output of a flat plate would be reduced by 10%, whereas the flask system’s efficiency is actually increased by 44%.

The difference between flasks and tubes
Chinese vacuum flasks are like a thermos flask with two layers of glass and a vacuum between these layers. There are many advantages to this:

For these and other reasons, Chinese flasks have been widely adopted, and many – but not all – are of excellent quality and durability.

BER assessments
Modern houses with their improved energy efficiency could benefit more from vacuum systems because the central heating is operating for a shorter season, and vacuum systems have a longer operating season which complements this nicely.

A problem arises when you try to use the figures for vacuum flask systems in DEAP for BER assessments and Part L compliance. Commercial solar simulation software takes the IAM figures into account, but despite requests to SEAI going back almost two years, there is still no way to incorporate IAM in Deap.

You might think that you could simply take the ratio between the two average IAMs as a multiplier. The reality is more complicated because the multiplier should reflect the amount of time that the sun spends at each angle, and efficiency will also change as fluid temperature and ambient temperature changes throughout the day. You also get different effects depending on the roof pitch, orientation, and the amount of sunshine.

We ran identical panels through simulation software with each of the IAM curves shown in the graph, using various roof pitches and locations in Ireland. These showed a net increase in output of between 16 and 19% as a result of the altered IAM.

Not all vacuum flask systems have the same IAM curve, and it would be difficult to develop a formula that would reflect the effect. However, it would seem reasonable to allow BER assessors to increase the zero loss efficiency used in Deap provided they or the panel manufacturer can produce documentary evidence supporting this change for the conditions.

In the case of the example shown in the graph above, the multiplier would bring the zero loss efficiency from 66 to 78.4%. When you take into account the true efficiency, combined with the improved heat loss coefficient of vacuum systems, it becomes apparent that vacuum flask systems are extremely efficient at all times, often at a lower capital cost, and with lower long-term maintenance costs.

IAM for tubes with an enclosed flat plate
Lastly, it should be stated that this situation does not apply to vacuum tube systems which have a small flat plate inside a single glass tube. Their IAM more closely resembles that of a flat plate panel.

Quentin Gargan is a lecturer on the Fetac solar training in Cork Institute of Technology and is a founding director of Ecologics Solar Solutions. He has worked with both vacuum flask systems and Austrian flat plates, and would argue that commercially he has no axe to grind.